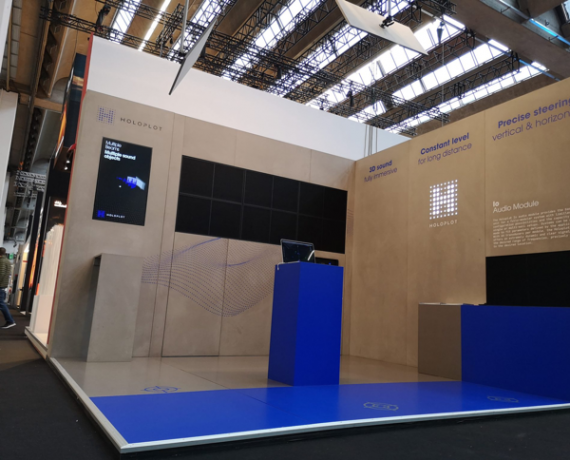 FRANKFURT, GERMANY. Audio technology innovator Holoplot GmbH is citing another hugely successful edition of professional technology exhibition Prolight + Sound, which took place at the Messe Frankfurt from 2 to 5 April. Along with extensive showcases of its current products – including those in the ‘more than beamforming’ ORION Series – the company was an enthusiastic participant in the education programme, with Head of Applications Emad El-Saghir giving two well-received presentations.

In ‘Employing room acoustics not loudspeakers to craft unique immersive soundscapes’, (Immersive Technology Forum, 3 April), El-Saghir addressed the potential of Holoplot’s wave field synthesis technology to help shape creative sonic experiences by working with the acoustics of a room. By taking this approach, El-Saghir explained, it is possible to design immersive soundscapes through the use of a central loudspeaker array and the harnessing of room reflections. 3D directivity control and the accurate positioning of sound objects in space give rise to numerous creative opportunities, and several of these were explored during the well-attended presentation.

El-Saghir’s second session considered the topic of ‘The next level of sound reinforcement: even coverage and unprecedented illegibility to the last row’ (4 April). This presentation took place as part of the CAVIS series of seminars, previously known as the Manufacturers’ Forum. Achieving a pleasing and fully intelligible listening experience for attendees throughout a public facility is an ongoing preoccupation of sound designers and consultants around the world. In this session, El-Saghir demonstrated how Holoplot’s 3D directivity control and wave field synthesis technologies can deliver improved coverage and help maximize STI values throughout an entire audience space, with particular reference to speech-heavy events such as conferences.

The popularity of Holoplot technologies for applications in meeting rooms and conference centres underlines the importance of one of its key company objectives. As El-Saghir remarks, “the goal of Holoplot is to make every seat, the best seat in the listening area.”

In conjunction with the two presentations, Holoplot undertook presentations of its flagship ORION Series solution throughout Prolight + Sound 2019. Developed to allow designers to bring the benefits of wave field synthesis to any installation in a modular way, the ORION Series comprises a software interface, Orbit, which is used to position sound sources precisely in space, along with two items of hardware: the Io module, which is an active loudspeaker having 64 transducers; and the Eta core, which processes the audio signals and masterminds Holoplot’s wave field synthesis engine.

Collectively, the ORION Series products “provide a tool which introduces a new level of control, flexibility and precision, especially when it comes to the creation of intelligible speech or mind-blowing, unique immersive audio experiences. Once again, we were delighted by the positive reaction that we received to the ORION Series solution throughout Prolight + Sound, both at our booth and during Emad’s presentations,” says Roman Sick, CEO, Holoplot.

The core markets for the ORION-Series include conferences, where its ability to deliver superb speech intelligibility, homogeneous coverage of the audience and authentic localization resonates strongly; and retail facilities and experience centres, where it can be used to craft compelling immersive soundscapes for more creative and interactive consumer experiences.

In addition to these core markets, Holoplot is continuing to explore new opportunities for its family of technologies in museums, entertainment venues and other public spaces.

“Prolight + Sound is an important show for us to share our insights and discuss the industry’s application challenges with other professionals,” says Roman Sick. “The special characteristics of our technologies benefit from detailed demonstration, and we were delighted to have the opportunity to do just that via both our forum presentations and on-booth sessions. The result is that even more people now understand the tremendous benefits of wave field synthesis and 3D directivity control for applications including conferencing and retail, and we look forward to following up on the many new leads generated at the show over the next few months.”