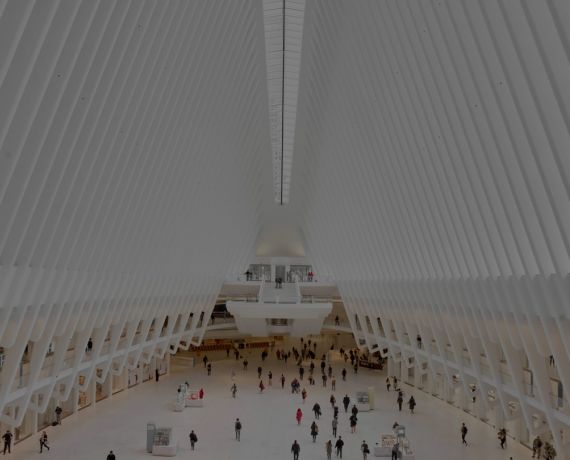 Traditional loudspeaker technologies have been around for a long time, and while these have come a long way since their inception, they’re not without shortcomings. They are characterized by a loss of volume over distance, feedback and in many cases poor uniformity of coverage. Holoplot’s groundbreaking approach to public announcement (PA) system design represents a significant enhancement in sound reinforcement that helps acoustic consultants, sound designers, and event planners deliver ideal audio coverage to every seat in the house.

In this blog article, we will introduce the challenges of conventional loudspeaker systems and identify four ways in which the live sound reinforcement market benefits from Holoplot’s breakthroughs in wave field synthesis and 3D beamforming.

In live sound, coverage is defined as the area that experiences a consistent audio response within a 6 dB drop-off from the sweet spot. From the perspective of sound design and acoustic performance, uniform coverage refers to a consistent listening experience from every position in the specified audience area. Acoustic consultants and sound designers take into account a number of variables to create uniform coverage, depending on the environment and application.

In order to achieve an optimum sonic experience for attendees, consistent sound pressure level (SPL) and frequency response need to be delivered across the entire audience area. For indoor venue situations, the room acoustics have a significant impact on audio quality, and in some instances require extensive acoustical treatment to minimize reflections and reverberation time. This often necessitates the use of multiple loudspeaker arrays to deliver clear audio signals to each listening position in the audience.

In applications where the sound system is primarily used to amplify speech, the system’s capability to produce a signal with an appropriate direct-to-reverberant ratio is crucial. This becomes particularly challenging in buildings where walls and ceilings consist of hard and smooth surfaces like concrete, drywall, and glass. Whereas softer materials generally absorb sound and yield greater clarity, these harder materials reflect sound waves and increase reverberation time, making it more difficult to deliver high levels of speech intelligibility.

A primary limitation of conventional loudspeaker design is a lack of uniform coverage, resulting in inconsistent listening experiences for audience members throughout different parts of the room. This failure is caused by the inability to fully control the signal directivity of conventional column and line array speakers, creating a loss of sound pressure level over distance. The reason for this attenuation is that, in the horizontal plane, a line array still acts like a point source – its directivity can only be shaped in the vertical plane with splaying or digital signal processing.

Based on the principles of wave field synthesis, Holoplot technology has introduced 3D beamforming, a new tool for improving the ratio of direct sound to reverberation. In practice, this means that waveforms can be shaped and steered vertically, horizontally and diagonally. These steering capabilities allows system engineers to create spherical beams, planar beams and focus beams.

Planar beams are highly energy-efficient sound waves that only attenuate with air resistance. This results in a high concentration of sound pressure over long distances. Within the coverage area of the beam, the SPL is nearly constant, and only drops outside the area. With beamforming, acoustic designers and system engineers can minimize reflections off hard surfaces, leading to significantly improved direct-to-reverberation ratios and reduced impact from the diffuse field.

With Holoplot technology, a single centralized PA system can cover great distances with uniform levels and high intelligibility. A test installation with Germany’s Deutsche Bahn train station demonstrated sound pressure level losses of only 5% over a distance of 325 feet (100 meters). Conventional sound systems would require multiple loudspeaker arrays in different positions to achieve uniform level distribution over such a distance.

For live music applications, Holoplot 3D beamforming technology can be used to cover the entire audience area with uniform SPL and frequency response using a single loudspeaker array position, without the need for multiple arrays and delay towers.

When planning a sound system for railway stations, conferences or concerts, it is important to minimize noise pollution beyond the desired area of coverage. Planar beams are extremely useful for avoiding unwanted noise pollution. They concentrate the sound energy in areas it is needed, adding very little to the diffuse field.

Another beam type that Holoplot technology enables is the focus beam. With its spherical shape that has a 30cm diameter, a focus beam makes it possible to precisely focus an audio signal into a specific location in space. This greatly reduces noise pollution while creating a feeling of proximity to the source for the listener.

The ability to control the type and direction of sound waves makes it possible to freely steer sound energy. This can reduce the noise pollution outside the desired coverage area.

Signal clarity and intelligibility are crucial in both music and speech-focused applications for a wide range of reasons, including safety, comprehension, and emotional impact. Especially in reverberant environments, hard surfaces cause reflections and echoes, making it harder to clearly understand the vowels and syllables of speech.

Holoplot 3D beamforming technology helps to overcome these challenges by focusing sound energy only where the audience is, while avoiding surfaces that contribute to reverberation. This greatly improves speech intelligibility in otherwise reverberant spaces, so that the message is heard loud and clear by every audience member.

In many creative sound installations, it is sometimes desirable for different content to be audible in different zones of the listening space. This can be quite the challenge due to the fixed directivity and noise pollution caused by traditional speaker systems.

The limitations of conventional loudspeaker technologies create a host of challenges for designers of public spaces, content creators and sound engineers, and ultimately, audiences themselves. By approaching the underlying physics of acoustic design in an innovative way, Holoplot wave field synthesis technology enables system designers and audio professionals to overcome these challenges and reimagine new possibilities in audio coverage.

To learn more about Holoplot audio reinforcement systems for conferences and speech-based applications, get in touch or contact info@holoplot.com

An integral part of the annual global gaming calendar, E3 2019 took place at the Los Angeles Convention Center from June 11-13, 2019. Developed by Next Level Games and published by Nintendo, Luigi&rsquo...

Holoplot awarded with AV Award 2019 Audio Technology of the Year

BERLIN, GERMANY, OCTOBER 2019. Holoplot has been awarded the “Audio Technology of the Year” Award at the AV Awards 2019. Organized by leading trade publication AV Magazine, this year’s ceremony...