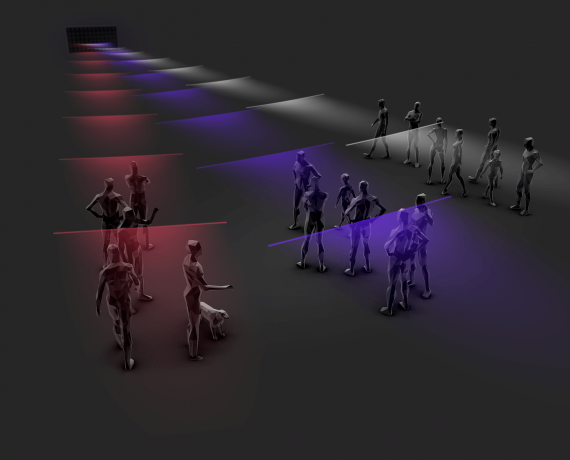 When it comes to musical recordings and live performances, reverb is one of the most useful and emotive effects for the human voice. But in speech-based sound reinforcement scenarios that require high levels of intelligibility—including conferences, classrooms, learning environments, houses of worship and more—reverberation is not only distracting, it can wreak havoc on the audio quality and intelligibility of the presentation. And as the distance between the listener and sound source increases, reverb makes it more and more difficult to hear the message and thereby process the information.

In this article, we’ll explore the root causes of reverberation and explain its sonic characteristics. We’ll also discuss important considerations when choosing a sound reinforcement system for speech-based applications and explain why conventional sound systems often fail to eliminate reverberation, leading to unsatisfactory results. Finally, we’ll explain how Holoplot technology eliminates the negative effects of reverberation altogether to deliver never-before-heard levels of sonic clarity and intelligibility, providing an ideal audio solution for conferences and a wide range of speech-based applications.

Exploring the Causes and Sonic Characteristics of Reverberation

When examining the root causes of reverberation, the surfaces of a room or space are key. Put simply, smooth surfaces reflect sound in the same way a mirror reflects light, and the incident angle equals the angle of the reflected sound. Rougher surfaces scatter sound and create diffuse reflections of a sound source. Another key factor is the composition of the materials in a space, as softer materials absorb sound waves and harder materials reflect them.

When combined, these factors explain why reverberation is often problematic for sound designers working in large rooms that are constructed of hard, highly reflective surfaces—including churches, train stations, public buildings, conference halls and other large spaces that require a sound reinforcement system.

The sonic characteristics of reverberation in a space can be measured by Acoustic Impulse Response (AIR). The greater the distance a listener is from a speaker or direct sound source, the more likely they will hear a range of reflected sounds—from discrete echoes to diffuse reverb.

The impulse response of a room is often quantified by the reverberation time, T60, which is the time it takes for reverberant energy to decay by 60 dB once a sound source is stopped abruptly. The geometry and reflective surfaces of a room govern the reverberation time, which is nearly constant across any location in a room. The impulse response, on the other hand, is spatially variant throughout the room as the speaker or listeners change their location.

In order to preserve intelligibility in a space, sound designers must calculate how the directional characteristics of a sound source are changed by the reflecting surfaces around it, which can be quantified by the Directivity Factor and the Directivity Index.

Intelligibility Factors and Sonic Characteristics of the Human Voice

The sound of the human voice is modulated by intonation, amplitude burst, syllabic rate, and syncopation. Speech intelligibility defines how much lucidity and distinctiveness of spoken information is maintained when transmitted over a PA system, which is represented as a single numerical value in speech transmission index assessments.

Source directivity also has a substantial effect on the quality of speech intelligibility. The more directional the source, the more the listener hears the direct sound versus the reverberant characteristics of the sound. Directivity can be defined with a "Q factor", being the ratio of sound intensity at a certain angle to the mean intensity for the full spherical radiation. An omnidirectional loudspeaker hanging in the middle of free space has a Q of “1”.

Each time that space is reduced by half, directivity doubles. For example, if the loudspeaker is placed between a floor and a wall, the directivity quadruples. If you place it in the corner between the floor and walls, it produces eight times the directivity. But even with a highly directional loudspeaker system, a listener sitting off-axis can experience poor intelligibility because of a decrease in the direct-to-reverberant ratio.

Starting in the 1960s, two-floor movie theaters began using vertically stacked speaker clusters to improve sound quality. Ever since there has been a tendency to concentrate on vertical directivity while ignoring horizontal directivity. In fact, multi-cell horn speakers introduced in the 1930s were capable of delivering much more even sound coverage by directing sound to different parts of the audience. Today, the majority of sound reinforcement system installations are based around setting up two vertical sources on the sides of the stage, which automatically causes comb filtering.

This means that even small changes in a listener’s position can result in up to 6 to 8 dB level changes in lower octave bands, which creates significant differences in the listening experience and uneven coverage.

Many current installations include either very small loudspeakers with very little directivity in the low/mid ranges, or larger setups consisting of one vertical line array per side to prevent drop off with distance and keep the sound loud and warm. However, balancing the expenses, aesthetics and ease of application are still an issue, and these configurations have limitations in horizontal coverage, volume, and low-end response.

Holoplot audio systems use groundbreaking 3D beamforming technology to enable customers to deliver as much direct sound as possible to defined listening areas while minimizing sonic energy that is delivered to reflective surfaces. This unique and ultra-efficient method of controlling sound keeps perceived audio impressions from reverberation, resulting in unprecedented levels of clarity and speech intelligibility—even in the most challenging acoustic spaces.

Our systems provide excellent ROI and improve acoustics in both newly-constructed and existing spaces. Holoplot helps users save on construction expenses by reducing the amount of absorption materials that are normally required when installing a traditional audio system. And since it’s a centralized solution, Holoplot systems minimize the need to install and hide long runs of cable. For system designers and sound engineers, 3D Beamforming eliminates the need to spend excessive amounts of time researching speakers, running simulations and endlessly tweaking speaker layouts to achieve optimal STI.

We enable beamforming on all axes in 3D space, vertically and horizontally, in real-time. Users can control both the vertical and horizontal directivity pattern of the system, offering unprecedented flexibility in any space. With traditional systems, users can’t control the directional pattern whatsoever, or can only control one axis (usually vertical) with a line array system.

In events held in large spaces with lots of glass or marble, such as a large conference centers, 3D beamforming allows users to shape the sound in the main area where the audience will be positioned while avoiding reflections from the back walls and ceiling with vertical beam steering and reflections from nearby windows with horizontal beam steering.

Planar beams have a wavefront which keeps a nearly constant amplitude across long distances and is capable of controlling low frequencies and minimizing SPL drop off as distances increase. These can be synthesized with our loudspeaker technology.

For example, at open-space conferences inside a trade show area, reflections are not an issue, but noise pollution often causes problems for exhibitors close to the stage.  Planar beams solve these challenges by maintaining constant SPL across the entire audience, while also limiting unwanted sound and noise pollution.

The Holoplot algorithms introduce full freedom in determining the properties of multiple individual beams. The coverage area is specified in the software by positioning virtual sound sources, and configurations like EQ and latency can be set independently.

With the option to deploy up to 16 beams, users can create several listening areas or enhance the experience of a single area with extra sound features such as focus points (individual messages or effects directed to certain listeners). To assure a perfect direct-to-reverberant ratio in complex setups, users can combine different beam types to achieve optimum coverage with minimal room reflections.

To learn more about Holoplot audio reinforcement systems for conferences and speech-based applications, get in touch or contact info@holoplot.com.

An integral part of the annual global gaming calendar, E3 2019 took place at the Los Angeles Convention Center from June 11-13, 2019. Developed by Next Level Games and published by Nintendo, Luigi&rsquo...